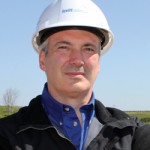 I recently returned from spending some time in Hannover, Germany, at Interschutz, the world’s largest trade show for all things related to fire protection.

Intereschutz normally happens every four or five years but it had to be rescheduled twice from 2020 and then 2021. The shadow of COVID-19 still hung over the event, which seemed to be only about two-thirds its normal size with some notable absences from the usual exhibitors. What follows are my general impressions as a North American attending a European/global show.

Europe has a reputation for being ahead of other parts of the world from an environmental protection standpoint and that is also evident when looking at fire protection. A number of manufacturers were displaying electrically powered fire trucks, including large airport crash trucks. I do wonder what would happen in the event of a very large fire requiring continuous water pumping for many hours. A diesel truck can be refuelled, but presumably, the batteries would take many hours to recharge.

There were plenty of manufacturers of firefighting foams touting their fluorine-free formulations. Europe is expected to ban fluorine in foams (and many other products) within the next year or two. How far behind will Canada and America be now that suitable alternatives are commercially available?

Water mist technology has a much wider following – not just for suppression systems but also as a method for firefighters to permit rapid intervention and extinguishment using far less water than conventional methods. When a car catches fire on a highway in North America, we dispatch a heavy pumper with a full crew to battle their way through traffic. Imagine instead sending a single firefighter on a motorcycle equipped with a water mist lance to do the same thing.

On the flip side of water mist, there were numerous displays for those in the oil/petrochemical industry where there might be a need for very large volumes of water. I saw plenty of 12” hoses and pumps that could feed nozzles up to 10,500 gallons per minute. There were also several manufacturers using jet engines or fans borrowed from the snowmaking industry to create large plumes of fine droplets.

Dealing with the risk of thermal runaway from lithium-ion batteries has been a challenging conundrum for firefighters around the world. I saw a number of creative solutions. Lacont offered their BBS battery cabinet made mostly of cement and weighing 3 tonnes that they claimed could withstand both fire and explosions of batteries. A few companies were displaying fire extinguishers designed specifically for dealing with (small) lithium-ion battery fires. They either used a proprietary foam formulation or Electric car battery fires. I saw some interesting ideas to deal with electric car battery fires. One was focused on applications such as ferries and included a fire blanket to cover the vehicle with aerosol generators to at least temporarily extinguish the fire. As you know, car batteries can re-ignite hours or days after initial extinguishment, so the traditional recommendation has been to dump the vehicle into a large water tank for an extended cooling off period. Vetter has developed an interesting idea called EIS (E-Vehicle Isolation System) that looks like a car diaper that is placed under and around the car that would then be filled with water and has lifting straps so the car and its protective diaper can be put on a flatbed truck and moved to a safe area.

There were some newer approaches to smaller electrical cabinet/server fires with N2 Global and ExxFire using inert gas generators rather than pressurized cylinders. Nichibou has received UL approval for their Erase Tube - a very simple idea that puts the agent into a plastic tube under pressure. In the event of fire, the tube ruptures releasing Novec 1230 into the space. Various tube lengths are available to protect different sizes. Firetrace and Rotarex have used a similar concept but their tube has always been fed from a cylinder adding considerable complexity.

Whether I attend a fire or safety show in Europe, I am always struck by how much more fashion-conscious manufacturers are there. Bunker gear, firefighting boots, gloves and helmets all seem to be designed with fit, form and function while also looking far more tailored than what we manage to produce and get approved for use in North America.